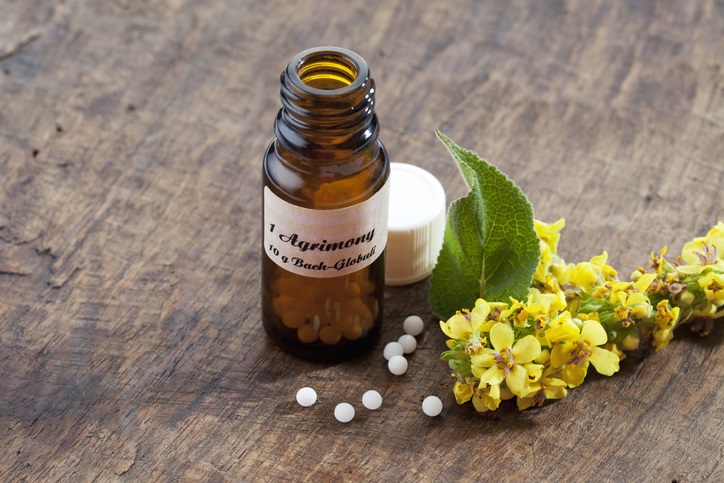 Bach flower remedies are natural remedies which are made of flowers, minerals, and various therapeutic substances. Bach Flower Remedies is an alternative therapy that has been used for many centuries to treat various mental and physical health issues.

The creator of the Bach Flower Remedies is Edward Bach. He was a medical doctor in England during the 1920s who was discouraged with the state of health care at the time, and decided to take his practice in a different direction. He combined his knowledge in homeopathy with ancient Chinese theories to create an alternative therapy based on floral essences.

Bach Flower Remedies work by helping you feel better emotionally and mentally as well as physically. The theory is that your body’s energy centre or chakra system can be blocked because your emotional energy has been blocked

Now apparently, you can use them even to lose weight, but not so much to actually lose the pounds but to help you emotionally maybe when you crave food, or you feel down. To actually lose weight you have to physical exercise and follow a good and healthy diet.

Undoubtedly, anxiety, stress, guilt and other factors can make it really difficult for us to follow a regime. And apparently Bach Flower Remedy can help in this case. They might support us psychologically during the path to lose weight, they help us to control emotion and nervous hunger, they break that vicious circle in which the more stressed we are, the more we would like to eat.

There are moods that often stop us from making any progress, pushing us to use food as a source of pleasure or as an anti-stress. And then the motivation is not always strong enough to allow us to maintain a constant diet over time, which is the only way to really lose weight.

Coconut oil, how to use it in the kitchen

Worked in many sectors including recruitment and marketing. Lucky to have found a soulmate who was then taken far too soon. No intention of moving on and definitely not moving to Thailand for the foreseeable future. Might move forward. Owned by a cat.

Coconut oil, how to use it in the kitchen

Coconut oil is a versatile household item with a long list of uses. It can be used for cooking, as a beauty product, and even as an animal product. Coconut oil is really useful in the kitchen for frying or baking and can be used as a healthier alternative to butter. In the beauty routine, coconut oil helps keep skin hydrated and healthy by being applied topically to the skin or hair.

Coconut oil is a natural product that is a fat, of which 90% is saturated. A spoonful contains 130 calories and 14 grams of fat. Coconut oil has been popular throughout Southeast Asian countries for centuries due to its many benefits such as being an antioxidant, soothes burns, hair conditioner, moisturizer and more.

Coconut oil is a nearly magical food that can be used as a substitute for practically any other fat. In cooking, one can also use it instead butter, but keep in mind that the latter has a higher water content.

There are two main types of coconut oil on the market: virgin and refined. The first is a pure oil that has been cold pressed and extracted without the use of solvents. The second type is refined, which has been processed with solvents to extract all fats and oils.

Coconut oil is perfect for cooking, baking and frying. It can be used as a replacement for partially hydrogenated vegetable oils to help reduce the amount of trans fat in foods. It’s also a low-calorie alternative to butter and margarine.

Refined coconut oil is more suitable for frying or cooking at higher temperatures. One of its peculiarities is that it has low levels of saturated fat and high levels of polyunsaturated fat. Coconut oil, especially virgin oil, is rich and tasty and is an excellent alternative to butter or animal fats, and therefore it is suitable for many vegan recipes. It should be kept in a cool and dark place and used in cooking to give a light flavour and a sweet coconut aftertaste.

It’s good for so many things from salad dressing to making smoothies, just give it a try.

I once had a friend called Harry, and I can only wish that if you are going through a time of extra stress, that you find such a friend as Harry. Harry was a good listener and responded with empathy to whatever misery was being offloaded onto him. He had learnt to cope with his own difficulties, by cultivating a calm contemplation of solutions and practising tenacity.  If it is not possible to make time for yourself, as Harry recommended, people will inevitably find it increasingly difficult to cope.  A job that is over demanding, or caring responsibilities at home, when there is no respite, will take their toll.  It is not always possible to set reasonable goals, without considerable social support.It is over thirty years since I last saw Harry, but I remember everything we discussed.

There is a fictional character I like called “Drop Dead Fred”. The 1991 film starred Rik Mayall. Besides over the top comedy, Fred encouraged assertiveness in a young woman, lacking in self-confidence. Faced with her unsupportive mother and faithless husband, she summoned the imaginary friend of her childhood, “Drop Dead Fred” for assistance. Finally, Fred told her that he had to go, when, job done, he had inspired her to be able to cope herself.
Paul Simon was inspired to write the beautiful song “Bridge Over Troubled Water”, which has given comfort to many people in hard times.  There are times when we all need a friend.

The problem of Loneliness

Loneliness is universally recognised as being part of the human condition. The emotion of sadness at being alone, can be felt, even when in the company of others.
People may spend hours brooding  about things that make them feel sad, angry or worried. Everyone feels lonely at times, but when transient loneliness becomes chronic, it is a problem  that may be damaging to health, leading to depression  and physical decline.
Since the start of the Pandemic, Society has experienced lockdowns, restricting freedom of movement and people have been unable to visit each other’s homes, unless in a “bubble”, a known contact deemed to be safe. This has led to social loneliness, which people with access to social media have sought to remedy with Zoom meetings,face time and Skype calls.
Dependent on the whims of electronic devices, people may comfort themselves with the knowledge, that their isolation will have an ending, while those experiencing emotional loneliness, may not have this, with which to look forward. They may be experiencing existential loneliness, confronting what philosophers such as Jean Paul Sartre see, as the absurdity of our existence in a meaningless world. Not surprisingly, this will lead to a great deal of anxiety.
While not feeling cosmic isolation, immigrants may miss their own countries and feel themselves to be outsiders, living in a foreign culture, leading to their cultural loneliness.
Faced with so much misery, what can be done? Self care and sharing the emotional load is the advice given on websites dealing with physical and mental health. Paul McCartney in 1966 brought loneliness to public attention with his song “Eleanor Rigby” about a woman who hid her distress from others by wearing ” a face that she keeps in a jar by the door”.  In later songs, McCartney offers words of encouragement to John Lennon’s son Julian in “Hey Jude” and he remembers the advice his mother Mary gave to him, in times of trouble, to “Let It Be”.
In 1988, Neil Diamond expressed his existential loneliness in the song “I Am I Said”, protesting the worth of his existence in an empty and uncaring universe. While we may be less eloquent than Paul McCartney and Neil Diamond, surely sharing our negative emotions is the way forward, to bring us out of Loneliness?
Post Views: 439